Jack Starr’s Burning Starr has unveiled the first video for his upcoming new album, Souls Of The Innocent, released by Global Rock Records on July 15 worldwide.

The first video and first music from the new upcoming album is once again Burning Starr’s best… American power metal. The new video showcases the band’s new lineup in a setting they feel most comfortable in… playing.

Watch the video for “Souls Of The Innocent” below.

Bassist Ned Meloni says, “I’m beyond thrilled with the release of our new album, Souls Of The Innocent. We’ve managed to push our limits in new directions while maintaining the same path we’ve been on for the past few years. “There’s an ever-present, intangible band X-factor throughout this album as a result of working together for so many years. Our individual and collaborative efforts across the writing and acting departments reached new heights on this one. The addition of our new vocalist Alexx Panza brings pleasing new textures and wonderful vibrato while retaining Burning Starr’s signature and proven vocal dynamics. Working with Kevin Burnes again means we have top-notch production values ​​and sonic perfection. I can’t stop listening!”

Jack has the following to say about the new album: “When Virgin Steele released their first album in 1982, the record company asked us to say a few words about it and why people should buy it… I remember all of us discussing the various influences we had and what the songs were about, I remember one member saying people should buy the album because it has some great songs that were very heavy and had cool riffs i remember someone else in the band saying the vocals were killer and the drums were like thunder and metal fans would love that, someone else said the game guitar was really great. But what I remember the most is when the bass player said those simple words “Buy it… It’s good”.

Forty years later, this sentence has even more meaning. Burning Starr, the band founded by Jack Starr in 1984, is on its tenth album… Yes they have improved… Yes they have thundering drums provided by Rhino (former Manowar drummer) and yes they have vocals killer sound some would like to describe as a “collapsing pillar” provided by Alexx Panza, and yes again, they have massive, nimble playing from longtime Burning Starr bassist Ned Meloni…last but not least, excellent guitar playing by former Virgin Steele guitarist Jack Starr.

But after all the hype and slogans wear off, the gist remains…and the words still ring true…”Buy it…it’s okay.” 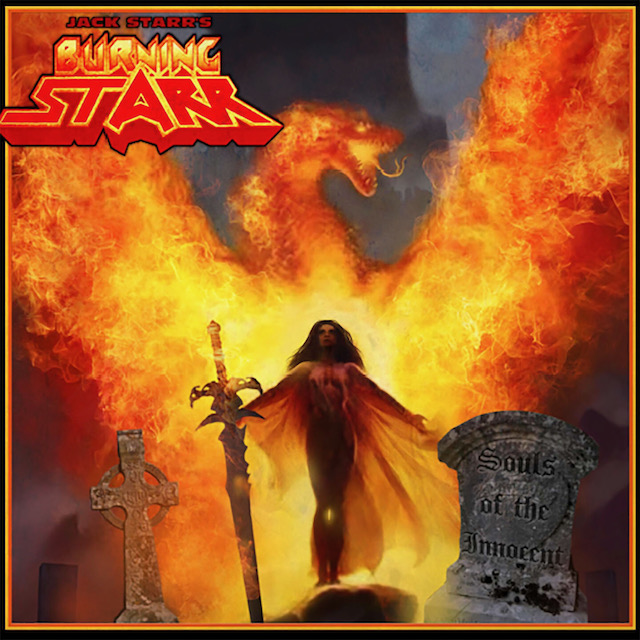 Video “Souls of the Innocents”:

Look for Burning Starr on the road in 2023 and beyond as they celebrate nearly 40 years of Burning Starr. Many surprises are planned later this year and until 2023 with a career-spanning anthology, reissues of the old catalog and much more!