The sixth episode of No Cover debuted on Youtubeand can now be enjoyed below.

No Cover is the only true original music competition show focused on the changing lives of unsigned artists. This series is about discovery, mentoring, harsh reality, and launching careers. No Cover is created and produced by the music industry, not traditional Hollywood studios. This is the show that fans and musicians around the world have been waiting for years and it’s finally here! No cover, no mercy!

No Cover was filmed on location at the legendary Troubadour and Sunset Marquis in West Hollywood, California. 25 of these original artists will compete for the top prize, which includes a six-figure record deal with Sumerian Records, representation from United Talent Agency and Shelter Music Group, performance spots at a music festival Danny Wimmer Presents, a $10,000 shopping spree from Guitar Center, plus brand new gear from Gibson USA, Mesa Engineering, Ernie Ball, Liquid Death and Discmakers.

Check out the first five episodes:

Rock and Roll Hall of Famer Alice Cooper is widely known as the original “shock rocker” with a hugely successful career in music spanning an incredible six decades. His hit songs “School’s Out”, “No More Mister Nice Guy” and “Poison” are rock radio staples and his iconic appearances in films like Wayne’s World and Dark Shadows have endeared him to generations of fans. .

“I can’t wait for No Cover,” Alice Cooper said. “To me, a band really isn’t a band unless they’re writing their own material, and if you know anything about me, you know I have a very high standard not just for songs but I’m looking for the band that has it all, the one that can not only write it and play it, but also play it and make me BELIEVE it.

Grammy-winning singer/guitarist Lzzy Hale brings a strong and powerful perspective to No Cover as she has fronted the band Halestorm with her younger brother, Arejay for over 20 years. Lzzy is a leader among her peers and a fearless voice for her legions of young fans. The star of numerous music magazine covers, she has won numerous industry awards such as the Golden Gods and was recently named “Artist of the Decade” by Loudwire. Lzzy also has his own Gibson Artist Series guitar, the Lzzy Hale Explorer.

“I’m beyond thrilled to join my friends, peers and fellow rockers as a judge for Hit Parader’s music competition No Cover TV show. I hope my passion and experience will help inspire and encourage these young bands to chart their own path in this world.“ — Lzzy Hale.

Bishop Briggs, the powerhouse of alternative pop, has positioned herself to empower herself. With the platinum-certified viral hit “River,” over 3.2 billion streams worldwide, and the opening of Coldplay under his belt, Bishop shows no intention of slowing down.

“I’m beyond excited to be a judge on No Cover! Songwriting is such a therapeutic outlet for me to express myself that I can’t wait to dig deep and learn more about each person who comes up. on this stage.” — Bishop Briggs

As singer, guitarist, songwriter and founder of iconic multi-platinum rock band Bush, Gavin Rossdale has sold over 20 million records in the United States and Canada alone. Bush compiled an incredible streak of 23 consecutive Top 40 singles on the Modern Rock and Mainstream Rock charts. Eleven of them reached the Top 5, including six at number one: “Comedown”, “Glycerine”, “Machinehead”, “Swallowed”, “The Chemicals Between Us” and “The Sound Of Winter”. Bush recently released his eighth studio album, The Kingdom.

“I’m thrilled to be a part of No Cover – what a talented panel of artists to collaborate with.” said Gavin Rossdale. “We’ve seen the shows sing the hits – finally the chance to find a real band with their own sound and vision. Hopefully we’ll thrust great artists into the spotlight.”

Visionary guitarist Tosin Abasi is best known for prog-metal band Animals As Leaders and as co-owner of custom guitar company Abasi Concepts. Tosin was recently named “Guitarist of the Decade” by Guitar World Magazine and has just played his first big role in the new movie Bill & Ted: Face The Music.

“I’m really looking forward to being part of this incredible panel of judges. It’s the first time I’ve seen a show like this that really connects with the music I’m into. This is going to be great!” — Tosin Abasi

“I’m thrilled to have the opportunity to co-host No Cover! I’m thrilled to join the artists on their journey,” said Kellin Quinn. waiting to be discovered! I’m ready for the rest of the world to share this experience! Be ready!”

As part of No Cover, participating artists will have the chance to perform and win prizes through a partnership with the world’s most iconic American guitar brand, Gibson. The Gibson team believes in the power of music, supports music education, and puts instruments in the hands of those who desire making music is a truly life-changing event.

Live events are the backbone of the entire music industry and that’s why No Cover has proudly partnered with leading independent rock and alternative festival producer, Danny Wimmer Presents. The winners of the first season of No Cover will have the opportunity to perform at a future multi-day DWP festival.

Winners of the first season of No Cover will also have the opportunity to record music at Nightbird Recording Studios, located in the Sunset Marquis Hotel. Nightbird celebrates multi-platinum and chart-topping projects year after year, including work with Kayne West, Ozzy Osbourne, Post Malone and U2. 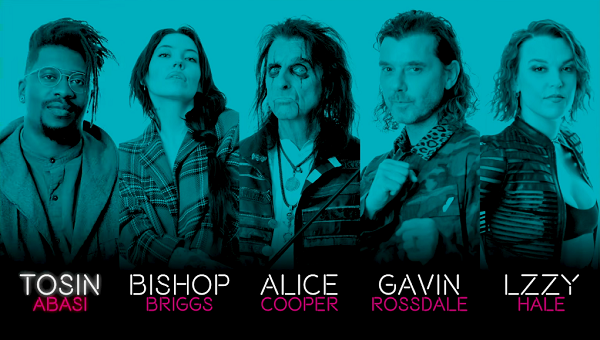