Dieth is the new international death/thrash metal band founded in Gdańsk, Poland. Created from three of the most powerful forces in their respective genres – guitarist/vocalist Guilherme Miranda (ex-Entombed AD), drummer Michal Łysejko (ex-Decapitated) and bassist David Ellefson (ex-Megadeth) – the trio pushed back the stereotypes of their genres to create a charismatic new sound, rich with inventive guitar riffs, tight drum grooves, technical prowess, throaty vocals and catchy melodies, serving as a passage to their new statement. 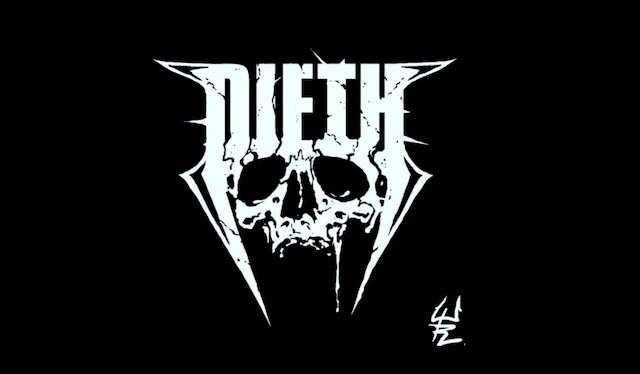 Guilherme explains: “So much has happened lately (in life), feeling the need to express ourselves accordingly. Create something new, make a fresh start. Personally, it was a matter of life or death to return to play music. To do something truly meaningful and finally deal with anger and grief. Sometimes you have to die inside to be reborn. This is what Dieth represents, a new sonic driving force that leaves the past behind.

Ellefson continues, “The three of us found an immediate connection by exchanging ideas on the internet, and the band formed when we recorded the track In the Hall of the Hanging Serpents. I like that the music is defined by European death metal ideologies. Dieth allows you to recognize a much heavier side of my musical tastes.

Drummer Michał Łysejko adds: “For me, Dieth wakes up from a creative lethargy, with the feeling that the time has come. The lightness with which Dieth’s music flows from us, combining our inspirations and experiences into one whole, is proof of this. The fact that the band was formed in the Tri-City where I come from has symbolic meaning for me.

The video for the band’s first single, “In The Hall Of The Hanging Serpents”, was filmed in Gdańsk and directed by Maciej Pieloch – MP Productions who captures the fervor of the band’s heavy and charismatic sound, and mixed by Tomasz “Zed” Zalewski, renowned sound engineer who captured the sound and spirit of the whole band.